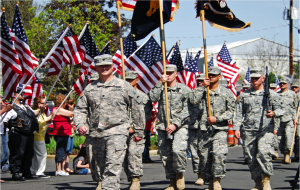 The Veterans Defense Resource Center (VDRC) provides expert training, support, advice, and assistance to promote zealous representation of veterans and service members in Oregon’s criminal justice system. The VDRC advises and assists public defense attorneys and court-appointed attorneys to take a specialized approached when representing veterans suffering from the invisible and visible wounds of war, to include but not limited to: Post-Traumatic Stress Disorder (PTSD), Traumatic Brain Injury (TBI), adjustment disorders such as institutionalization and re-acculturation, and/or depression.

The VDRC is the first program of its kind in Oregon and one of few in the Nation. This program was created in response to Oregon’s growing crisis where disproportionate numbers of veterans with untreated or undiagnosed service-related injuries and illnesses are lost in the criminal justice system. Studies have reported epidemic numbers of Iraq and Afghanistan War veterans with mental health illnesses. Previous research also found significant numbers of Vietnam War veterans had undiagnosed PTSD. Oregon has a specific problem. Sadly, approximately 19.1% of Oregon State Prison population consists of veterans. This is almost seven times the number of veteran inmates in California and four times as many as New York.

To combat this problem, the Public Defender Services Commission created the VDRC. This program will help attorneys advocate for the most vulnerable veterans who gave everything in service of their country and now find themselves in the criminal justice system. It is difficult for a civilian judicial system to understand what it means to serve, the culture of the military, and undergo the stressors of combat. The VDRC’s mission is to ensure that each veteran has an effective advocate; each veteran’s story is properly presented to a judge, jury, and prosecutor; and veterans get the treatment they need and deserve.

The VDRC advocates for a client-centered approach, which can include review of military records or requests, understanding the nuances of the military systems, expert referrals for PTSD, TBI, or other mental health evaluations and treatment, and liaison with support groups. The VDRC also trains and assists defense attorneys representing veterans to encourage mitigation and treatment.